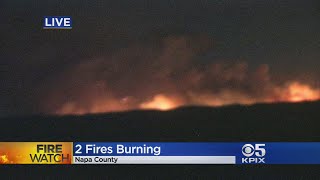 Multiple wild fires across Sonoma County and Napa County have prompted authorities to order evacuations. Smoke can be smelled as far away as San Francisco, and many near-by regions are sending fire fighters to help tackle the blazes. #SPMGMedia #NapaCountyCA #fire #SPMGMedia

With the support of national liberal groups, Randall Woodfin unseated a two-term incumbent. Progressive challenger Randall Woodfin on Tuesday unseated William Bell, the mayor of Birmingham, Alabama, in a nonpartisan runoff election. Woodfin’s ambitious platform and dogged ground game ultimately bested Bell, 68, a two-term Democratic incumbent who had been in city politics since before Woodfin was born. But not even Woodfin’s most optimistic boosters anticipated the resounding

O.J. Simpson is a free man. After spending nine years in prison for a Las Vegas robbery, the former NFL star walked out of Nevada’s Lovelock Correctional Institute at 12:08 a.m. local time Sunday, according to the Nevada Department of Corrections. Dressed in jeans and a jean jacket — the same type of prison denim that he wore during his parole hearing — white sneakers and a hat, Simpson, 70, signed release papers and quietly left the facility in the dark of night on the first

Happy October! Here is a list of October Holidays

Digital Studios Open for Rental: Get your films seen with marketing package

Digital Studios Open for Rental: Get your films seen with marketing package